Everyone despises waiting for an application to load—or when an application fails to load. And if this occurs with your application, you will lose not only business but also brand value. Most applications are now available online. As a result, servers play an important role in keeping apps operating.

A measure of a server’s performance, in general, is called server performance. Yet what constitutes “well”? Every server is created, set up, and used for a certain purpose. For instance, mail servers are used to manage and distribute emails, and database servers are in charge of storing, processing, and interacting with data, and so forth. When a server delivers the requested service at the requested time, it is said to be operating effectively.

END_OF_DOCUMENT_TOKEN_TO_BE_REPLACED

What is Agent-less Monitoring

END_OF_DOCUMENT_TOKEN_TO_BE_REPLACED

What is Server Uptime?

The current uptime of a server is the time elapsed since its last reboot. Years, months, days, hours, minutes, and seconds express uptime. Uptime starts at 0 (zero) every time the server starts up again, and it keeps going up as long as the server is working.

Why is uptime monitoring important?

Monitoring is standard in the IT industry because it allows you to maintain the ideal state of the company’s servers. The server performance monitoring procedure is pretty straightforward; it routinely collects server data and analyzes it in real-time or retrospectively. This enables us to guarantee that the servers run properly, delivering their intended purpose.
You may monitor nearly everything, including processor performance control, memory consumption, network, and disk space bandwidth, and server-related issues. However, understanding how to monitor a server is insufficient. It is essential to comprehend why it is such an integral component of its security. The purpose of monitoring is to provide information on failures and performance issues and to anticipate and prevent problems. In practice, this implies that faults or anomalies are discovered so quickly that the entire organization’s service, application, or operation is not halted. As a result, the company’s server infrastructure functions properly and reliably, and the company does not incur losses due to lengthy system outages.

END_OF_DOCUMENT_TOKEN_TO_BE_REPLACED

We are very pleased to announce a new major version of Xitogent which has lots of improvements. Xitogent is now served on our private repositories for Debian and Redhat distributions and can be easily installed and upgraded on any Linux server. It’s written in Go Programming Language and it’s super-fast, has a smaller footprint, and provides wide OS support.

Xitogent v1 was our first product for agent-based monitoring solution on Linux and there has been a lot of issues and bugs which has been addressed over the time, but it has been months that it didn’t get any new patches and version because we have been working hard to provide a new major and stable version for enterprise usage.

Here are a few lists of features and changes on V2:

All users using Xitogent v1 can update to v2 using one command, if you need help upgrading to v2 please contact us at [email protected] any time.

We will stop support for Xitogent v1 by July 31st, please make sure to upgrade as soon as possible.

We are happy to announce that Xitogent is now compatible with Rocky Linux 8. Xitoring offers free server monitoring (up to 5 servers) for Rocky Linux users.

Rocky Linux aims to function as a downstream build as CentOS had done previously, building releases after they have been added by the upstream vendor, not before. Its name was chosen as a tribute to early CentOS co-founder Rocky McGaugh!

By Installing Xitogent on your Rocky Linux server you can easily gather all server statistics and data without hassle, and Xitoring does the most for you. Including service discovery, creating initial checks, generating graphs, configuring initial triggers, etc.

Xitogent is a python-based and open-source application that is the core of our innovation, Xitogent can collect data from your servers in an efficient way. it’s very lightweight, easy to install, and configurable.
We are always developing Xitogent to improve and add features, At this time Xitogent has been tested on all major Linux Distros which are the most used OSes in the market.
You can read more about Xitogent here or on Github.

Rocky Linux is a community enterprise operating system designed to be 100% bug-for-bug compatible with America’s top enterprise Linux distribution now that its downstream partner has shifted direction. It is under intensive development by the community. Rocky Linux is led by Gregory Kurtzer, founder of the CentOS project. Contributors are asked to reach out using the communication options offered on this site.
October 11, 2021 Saman Blog No comments yet

We’re proud to announce that our Agent for Server Monitoring “Xitogent” is now fully supporting AlmaLinux 8.

AlmaLinux is one of several Linux distributions jostling for position as “the new CentOS” in the wake of Red Hat’s December 2020 deprecation of its own free-as-in-beer Red Hat Enterprise Linux clone distribution.

By Installing Xitogent on your AlmaLinux server you can easily gather all server statistics and data without hassle, and Xitoring does the most for you. Including service discovery, creating initial checks, generating graphs, configuring initial triggers, etc.

Xitogent is a python-based and open-source application that is the core of our innovation, Xitogent can collect data from your servers in an efficient way. it’s very lightweight, easy to install, and configurable.
We are always developing Xitogent to improve and add features, At this time Xitogent has been tested on all major Linux Distros which are the most used OSes in the market.
You can read more about Xitogent here or on Github.

AlmaLinux, an open-source community-driven project hosted by a non-profit foundation, intends to fill the gap left by the demise of the CentOS stable release. AlmaLinux is an enterprise-grade server OS, initially built by the team at CloudLinux, that is owned and governed by the community. CloudLinux has committed a $1 million dollars annual endowment to support the project. AlmaLinux OS is a 1:1 binary compatible fork of RHEL 8 with plans to support future RHEL releases by updating AlmaLinux OS.

Xitoring is now integrated with Slack to keep the entire team in sync. Slack provides a group chat platform for agile teams, making it easy to keep distributed groups informed and productive through real-time sharing of information and integration with third-party systems. You can now automatically send all incidents and warnings from Xitoring to Slack through this integration.

This integration will send the same information that you see in Xitoring incidents and receive on e-mail or SMS. The following types of information will be sent from Xitoring to Slack in real-time.

This integration is available on both Free and Paid plans!

You need a Xitoring account and a Slack account to create this integration. Configure the integration in Slack first.

In Slack, go to the integrations section of the account configuration.

Create the integration in Xitoring

After proper configuration, you will receive incidents from Xitoring for both Servers and Checks on your desired Slack channel for the entire team. 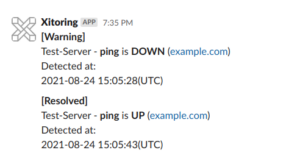 You can always contact our support team if you need any help enabling the Slack integrations.

NEWARK, Del., March 8, 2021 /PRNewswire/ — Xitoring, a software development company in Delaware, has created a new Software-as-a-Service (SaaS) that allows for a single command setup of server monitoring. Eliminating the tedious hours of setup, configuring alerts, and struggling with dashboards, Xitoring lets users set up server monitoring with a single command in their SSH. The system then sets up a dashboard, creates appropriate notifications, and provides natural language information, not simply data points that need to be interpreted. More information is available at www.xitoring.com.

Xitoring is offering lifetime server monitoring, with its complete package, for free on up to five servers. No credit card is required. Interested users can log onto www.xitoring.com and register their servers, add a single command line to the SSH, and have world-class monitoring in minutes.

“It seems like everything else in the world has gotten simpler,
except server monitoring,” said Mohammad Oslani, CEO of Xitoring.
“Typically, you spend a lot of time configuring the service, setting
up notifications, and interpreting a bunch of raw data. Xitoring is a
single command line, and we take care of the rest. It’s that simple.”

The traditional setup of monitoring on one server takes a while. Setting up 100 servers is a full-time job. With Xitoring it can all be done in minutes. Copy a single command line into your SSH, and you’re done. Xitoring is designed to do all the rest for you. Monitoring all the servers on your network, notifications of issues, and a simple, easy-to-read dashboard that shows performance charts on every server are what make Xitoring a powerhouse service that no firm should be without.

With its exclusive concept in server monitoring, Xitoring is able to track servers anywhere on Earth. The team setup function allows for messages to be delivered to an entire group, as opposed to a single person. Spreading the messages around to many people, particularly in different time zones and countries, allows a company to have 24-hour responsiveness to server issues.

“Metric and uptime monitoring, auto-discovery, automated triggers,
and server overviews, it’s all built into Xitoring,” Oslani said.
“Incident reports are created to describe the issues in plain English.
There are even automated alerts that let the right people know
when a server is having issues. This is the fastest, most effective
way to monitor your servers’ performance without the hassle of
weeks of setup.”

Xitoring is an innovative monitoring platform (SaaS) for servers. They bring data from servers using an agent (Xitogent) to make sure the servers are operating well, avoid downtime and performance issues, allowing companies to increase customer satisfaction. Xitoring was introduced in 2020 to revolutionize the server monitoring industry for those who are tired of cumbersome, traditional ways and are looking forward to automation in this vital part of their jobs.

If you would like more information about this topic, please contact us at 302-273-1383 or email at [email protected]

We’re proud to introduce our initial release of Xitoring, a Software as a Service, cloud based, and innovative Server Monitoring platform for who those are tired of traditional ways of Server monitoring.Our service is backed by cutting-edge technologies and using re-innovated software models that makes the whole process for the users much easier and faster.

You may ask yourself, there are already so many monitoring companies out there, why there should be a new one in 2021? well, we have been a customer of all those companies and they never deliver what we expected, the ease of use, the ease of installation, and the ease of configuration! we had to repeat the whole process again and again to start monitoring one of our servers. Xitoring is founded by experienced system administrators and the reason for the foundation is that it didn’t exist, so we had to use several apps to monitor our servers and always waste time. That’s why we spent years building this application, and we delivered very late, but it’s bullet-proof, because we made everything from scratch in a new, easy, and practical way.

Well, you already figured out the problem with other companies. Yes! the complexity of process for the user to add a new server to the monitoring system and configure checks, triggers, and alerts from scratch for each. Then, what’s our solution?

You can discover all Xitoring features!

Installation in a few seconds!

We use cookies to ensure that we give you the best experience on our website. If you continue to use this site we will assume that you are happy with it. Privacy policyOkNo